The classic DownThemAll extension for the Firefox web browser is now available as a WebExtension which makes it compatible with all recent versions of the Firefox browser.

DownThemAll came to fame years ago as one of Firefox's many useful browser add-ons. The extension added mass downloading capabilities to the browser to download multiple files from websites. It supported filters and lots of handy features to control and customize the downloading in one way or another.

The author of DownThemAll did not port the extension to Firefox's new WebExtensions system that Mozilla launched in 2017 officially with the release of Firefox 57. The main reason was a lack of APIs to create a copy of the extension; with many APIs not ready at the time and some features not being considered at all, it looked as it DownThemAll was dead for good.

The developer made an announcement this month that a WebExtensions version of DownThemAll would be released after all. It took less than two weeks to go from the initial beta release to the first final release. Firefox users may point their browser to the Firefox Add-ons website to install the new version in the browser. 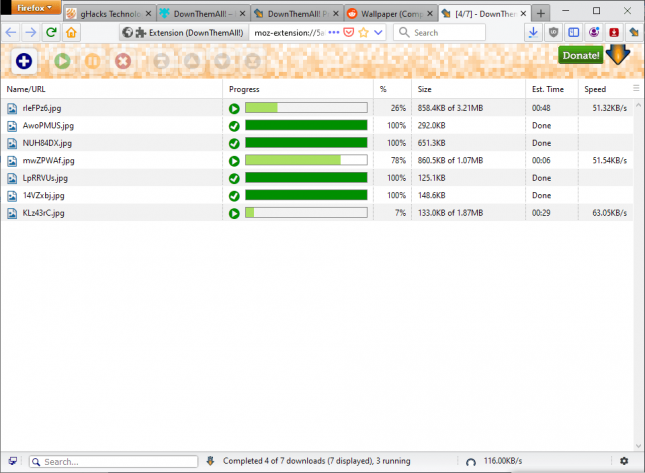 The WebExtensions version of DownThemAll is not a 1:1 copy of the classic version. Core features, namely the downloading of multiple files from sites, filters, and some other handy features, are supported. Other features, e.g. segmented downloads, error handling, conflict handling, or speed limiting, are not supported because of missing capabilities.

The extension adds its icon to the Firefox toolbar during installation. A click on it displays options to open the settings and to download files from the active site.

A new interface is displayed when you select the download option; it displays all links found during the scan of the page. 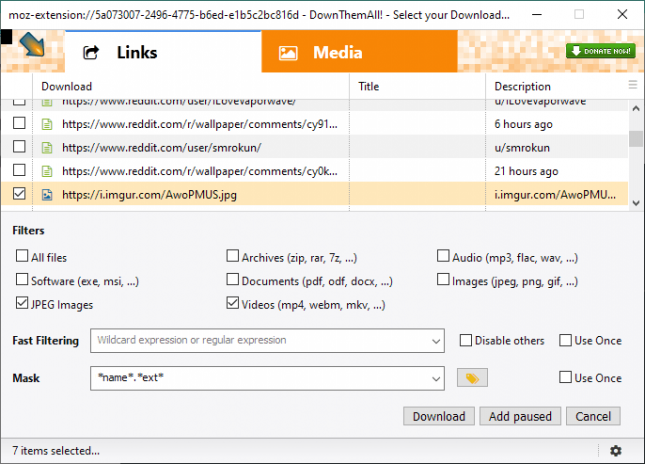 Each link is listed with its path, title if available and a description. Filters are displayed in the bottom half of the interface to quickly select certain file types, e.g. images, videos, or archives. You can select files manually instead as well if you prefer that, or use the advanced filtering options to quickly select custom file name and extension combinations.

The DownThemAll settings provide extensive customization options. You can launch them with a click on the icon and the selection of preferences, or from the Firefox add-on manager. 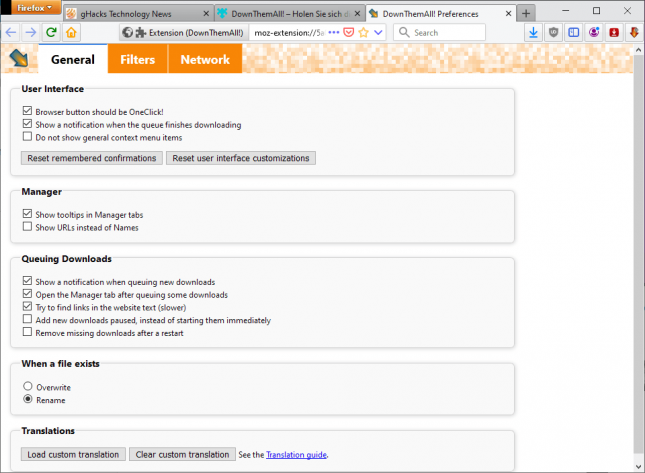 There you may turn the toolbar button to a one-click button instead. It is still possible to right-click to access other functionality that the extension provides.

The preferences list options to disable notifications and tooltips, create your own filter groups for use when selecting files, or change the number of concurrent downloads from four to another number.

The new DownThemAll supports core functionality and that may be sufficient to users who just want to download files faster from sites. It is certainly still excellent for that. It is clear, on the other hand, that the WebExtensions version will never be as powerful as the classic version of DownThemAll. For that to happen, Mozilla would have to extend API functionality and it looks as if this is not going to happen for certain required features.