Convert currency without Internet with XE Currency for Android

This is the first part of a mini-series that reviews travel related applications that I will take with me next year on a trip to South-East Asia.

While I'm pretty good with numbers, I like to have access to a currency converter whenever I travel to a country that uses different currency.

It is easy enough to come up with a rough estimate if you round up the exchange course, but if you want to be thorough or avoid making mistakes, you better use a calculator to assist you or confirm that rough estimate.

This is true especially for mid to high-end purchases and not so much for buying a candy bar or an apple in a supermarket.

There are many Internet tools available that you can use to convert currency using near real-time courses. I wanted an app however that would let me do calculations offline, as I have no intention of being connected to the mobile Internet during the journey.

XE Currency is available as a free application for Android that delivers that. While you don't get real-time courses when you are not connected to the Internet, you can still use the app without Internet as it uses the last rates instead in this case.

The app itself displays several default currencies including Euro, USD and the British Pound on start. You do need to be connected to the Internet at least once to refresh the rates (which are set to not available by default) but don't need Internet afterwards anymore to run the app (unless you add new currencies). 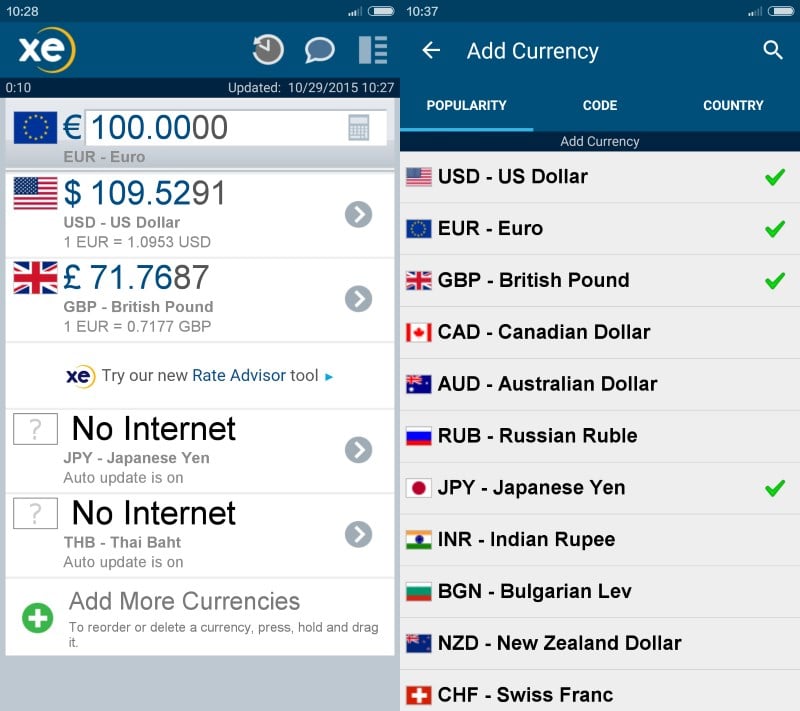 A tap on one of the currencies displayed lets you enter a number that you want to convert which makes it very easy to convert currency as it means just a couple of taps on the display to do so.

What you enter is automatically converted to all currencies displayed on the screen so that you see on first glance how much it is in that currency.

XE Currency supports lots of currencies that you can add or remove from the start screen. For instance, you can add Japanese Yen or Thai Baht easily to the listing, and remove currencies you have no use for from it.

When you add new currencies you need to pull conversion data from the Internet once as the application does so only for currencies displayed on the front and not all currencies it supports.

The settings list several interesting options. There you may disable auto-update for example, which will update the exchange rates if the device is connected to the Internet.

Other options include setting the number of decimals, disabling the logging of the location and sending it to the currency map mashup, and whether you want the base amount to be reset when you switch currencies.

Another useful feature is the shake to reset option that is enabled by default. When you shake your phone the base amount is reset to 1.0 automatically.

The app provides access to conversion charts which highlight the conversion rate over time, and a fee calculator.

XE Currency is a handy application for travelers who want access to a currency converter that does not require Internet to work after the initial setup.

My plan is to update it once a day in the hotel I'm staying in using WiFi. While the exchange rate may fluctuate throughout the day, it is usually by a slim margin only and not something that I'm overly concerned about.

Now You: What are your must-have travel apps?