One question touched Microsoft's upgrade push on Windows 7 and Windows 8.1 systems, and the fact that the company's methods to get users to upgrade to Windows 10 have become more aggressive.

Users reported for instance that Microsoft changed the upgrade notification prompt by removing the option to opt-out of the upgrade. The company seems to A-B test various options but all have in common that users are left without an option to opt-out.

While it is possible to close the upgrade prompt using the x-icon of the window, it is very likely that less experienced users won't know about that option. 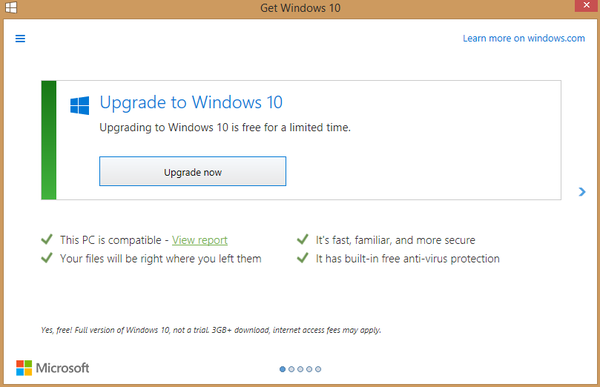 Capossela argued that Microsoft is trying to find the right balance as it moved to Windows as a Service, and that it is trying to reduce the fragmentation of the install base by getting users to upgrade to Windows 10.

Look we made Windows 10 for free for anybody who has a Windows 7 or 8 machine. You can call that freemium if you want, but that was a decision, you know we did not take that decision lightly.

For us, it was just so incredibly important to try to end the fragmentation of the Windows install base, and so we think that every machine that is capable of running Windows 10 we should be doing everything we possibly can to get people to move to Windows 10.

Another reason for pushing Windows 10 upgrades hard is that Microsoft is worried about the user experience as software or hardware may not work well or at all on older systems.

But we do worry when people are running an operating system that is 10 years old that the next printer they buy is not going to work well, or they buy a new game, they buy Fallout 4, a very popular game and it does not work on a bunch of older machines.

And so, as we are pushing our hardware partners to build great new stuff that takes advantage of Windows 10 that obviously makes the old stuff really bad and not to mention viruses and security problems.

So, we really are trying to push people to get to Windows 10.

Now the good thing about Windows is that lots and lots of people care and you get constant feedback. You know, we are willing to put up with some level of discomfort if we feel like we are getting more and more people to a safer, better operating system that is frankly better for everyone in the ecosystem.

Capossela referred to automatic updates on other device types, Apple's iPhone, Microsoft's Xbox and other devices, and how people are comfortable with the mechanism on those devices, and that this change in the PC world is "slightly more uncomfortable" for people because of the PC's longstanding history.

Microsoft is aware that its pushy methods are angering some users.

We are going to keep at it. We are going to try to find that right balance, but we just know there is a lot of people out there who constantly kick the can down the street without a little bit more of a, frankly, a push.

And so, you know, there is no doubt with a base as big as ours, it is hard to move anyone to a new model without angering some people.

Microsoft will continue to push Windows 10 upgrades, and it is likely that the new operating system will be pushed even more aggressively than it is right now.

While the company is aware that its actions are angering some users, mostly those who don't want to upgrade, those user numbers seem to pale in comparison to users taking Microsoft up on the offer and upgrading their machines to the new operating system.

You can listen to the whole session by following the link in the first paragraph of the article.