Microsoft is finally hiding the 3D Objects Folder in Windows 10

Microsoft released a new Insider build on February 24, 2021; it included fixes for the most part but made a few changes as well. One of the changes hides the 3D Objects folder by default on the operating system.

The "This PC" menu in File Explorer's sidebar displays a number of default folders and connected drives by default. One of the folders is 3D Objects, and since it is the only one that begins with a number, it is the first folder of the list. 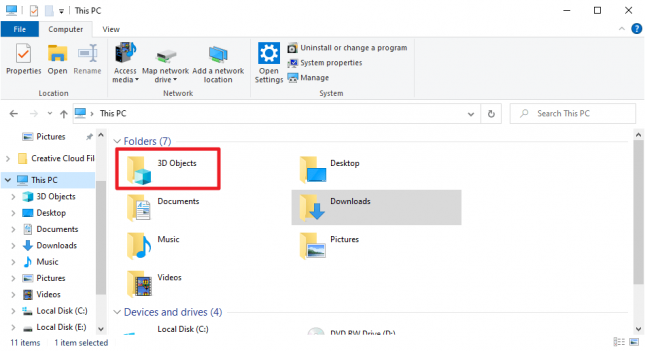 Most users had no use for the 3D Objects folder.

The guide may not be needed for much longer, as Microsoft will hide the folder in future versions of Windows automatically according to the changelog of the most recent Windows 10 Insider build:

The 3D Objects folder will no longer be shown as a special folder in File Explorer after updating to this build.

The folder is still available, but users need to enable it if they want to continue using it. Microsoft notes that users who do, have two options to do so:

The first option is a temporary solution as you need to access the folder each time you want to open the 3D Objects folder; the second option is permanent and restores the current status quo of stable versions of Windows 10.

Microsoft did not reveal usage numbers for its 3D applications and use of the 3D Objects folder. The removal is an indicator that the folder may not have seen the usage numbers that Microsoft hoped it would get since it was introduced.

Now You: did you use the 3D Objects folder? What is your take on Microsoft's decision?