Mozilla released Firefox 62.0.2 on September 21, 2018 to the Release channel. The new version of the web browser is a minor update that addresses bugs and security issues in Firefox Stable.

What happened to Firefox 62.0.1? It was an Android only release on September 7, 2018 that fixed a crash on sites with WebGL content. 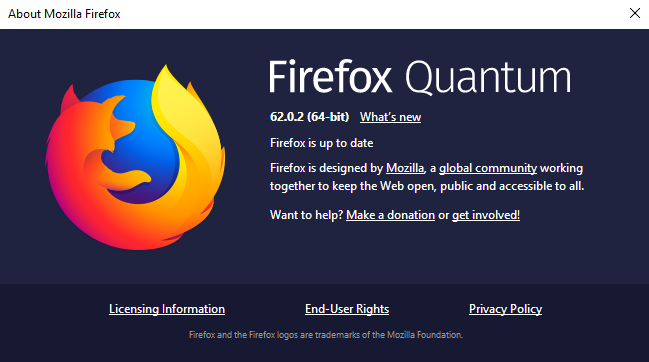 Firefox 62.0.2 is already available via the web browser's automatic update functionality. Firefox users can select Menu > Help > About Firefox to display the currently installed version and run a check for updates. Firefox should pick up the new version automatically then and download and install it on the local system.

The new version is also available as a direct web installer download or full Firefox offline installer on the Mozilla website as well.

The official release notes list 11 changes in Firefox 62.0.2 and security fixes next to that. The following issues have been resolved in the new Firefox Stable version:

Firefox 62.0.2 fixes a security issue that is rated moderate.