If you have installed the October 2018 Update for Windows 10 already on your own machine or PCs that you administrate, you may have encountered a number of bugs in that particular version.

Microsoft had to pull the update shortly after release in early October 2018; it took the company six weeks to re-release the update. The new version fixed some of the issues but not all of them.

Microsoft promised to do better in terms of update transparency and quality, but did release a statement that update quality was better than ever. 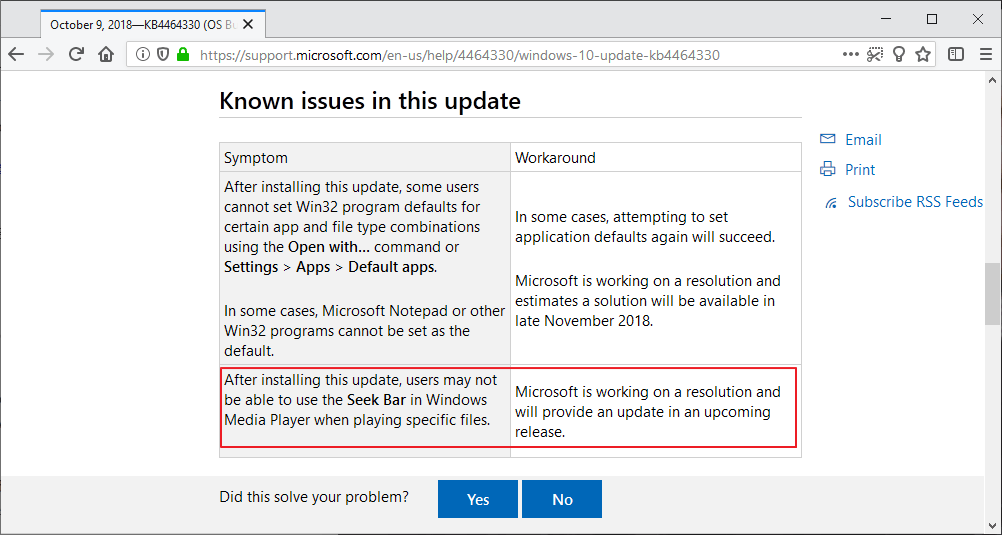 After installing this update, users may not be able to use the Seek Bar in Windows Media Player when playing specific files.

The company is working on a resolution according to the support page. The description of the symptom is rather vague; while it highlights the program -- Windows Media Player -- and the issue itself -- Seek Bar may not work -- it fails to define "specific files".

Which files or file types are affected by the issue? Microsoft does not reveal the information; the omission of vital information, in this case details on the affected files, means that it is impossible to assess the seriousness of the issue.

Is it a critical issue or not? If popular file types are affected it is more likely critical but if an obscure file type or even only some specifically encoded files are affected, it is not.

The lack of information falls in line with something else that I have been criticizing for years: the order in which updates and linked resource pages are published. Microsoft -- sometimes -- releases updates through Windows Update and other official distribution channels before support pages are published.

While it is possible to install these updates, it is impossible to know what they fix or do until the support page gets published. Support pages may not reveal much about updates either which brings us back full circle to the issue described in this article.

What should Microsoft do?

Now You: What is your take on this?