Revo Uninstaller is a popular established program for Windows to uninstall programs and to deal with traces of uninstalled programs that default uninstallers often leave behind.

Revo Uninstaller invokes the default uninstaller of software programs first and scans the system afterwards for traces. Traces are separated further into leftover files, e.g. in the program directory or temporary files, and data in the Windows Registry.

The program is available as a free limited version and a commercial version called Revo Uninstaller Pro. 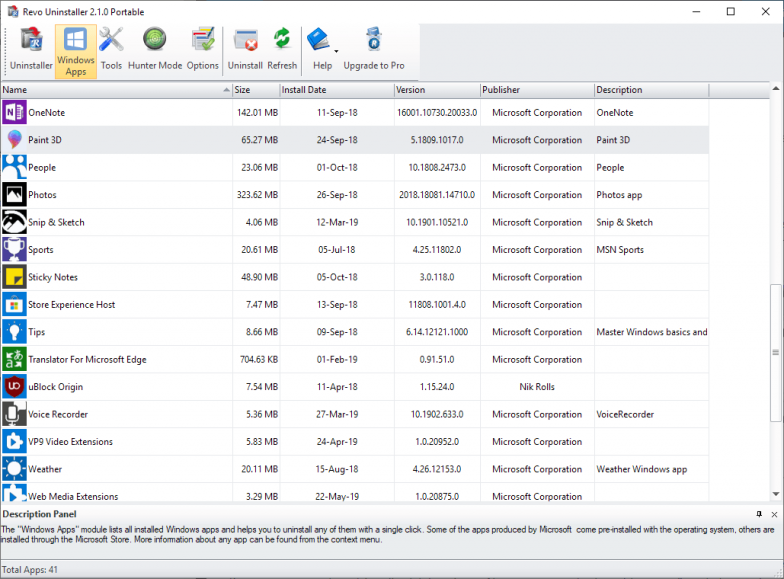 Windows users who run the new version on Windows 8.x or 10 systems will notice that they can select the Windows Apps option in the main toolbar now.

Revo Uninstaller lists installed Windows Apps in the interface on selection. Each application is listed with its name, size, install date, version, and publisher, and you may click on any column title to sort the list accordingly.

Note: While you can remove Windows Apps using the program, you cannot restore them at a later point in time.

Double-click on any installed Windows application to start the removal process. You may also left-click on any app to select it and activate the uninstall button next to initiate the process.

Revo Uninstaller creates a system restore point first before it invokes the built-in uninstaller which is run using a PowerShell command. What follows is the scan for leftovers which you may remove as well if any are found.

The program lists apps that Microsoft tagged as removable only. You won't find system apps in the listing and can theoretically use the Settings > Apps option to uninstall these apps as well. Revo adds its leftover scanning option to the removal process however.

The integration of options to uninstall Windows Apps and run leftover scans is a long-overdue step as it removes the limitation from the free version of the application. A program uninstaller that can remove only one type of programs looks inferior to uninstallers that support both; that is probably the main reason why the feature has been integrated into Revo Uninstaller Free. The feature is completely optional.

Now You: Do you use a third-party program uninstaller? (via Deskmodder, Techdows)